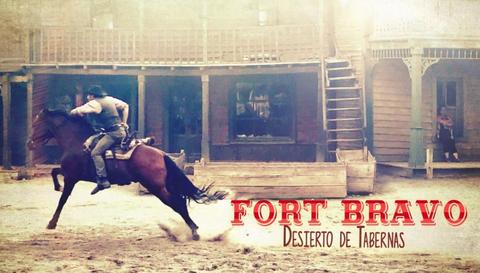 Fort Bravo
FORT BRAVO / TEXAS HOLLYWOOD are the most important cinema studios in Europe, where most Wild West movies have been shot. It started in the 60s, when Sergio Leone discovered Tabernas and began to shoot his blockbusters making Tabernas a benchmark in the western film world.

A dream came true in the Desert of Tabernas
We are in the natural landscape of Tabernas Desert and the stage sets are 100% original.
Fort Bravo currently have film shootings, adverts, short movies, clips and international film shoots. Since the 1980´s Fort Bravo have introduced western shows to the local tourism.

Fort Bravo specializes in western shows, with horses and the typical French style Can-Can Dance of the Wild West. Fort Bravo studios have an American and a Mexican town, and offers you the Saloon-Bar decorated at Texas style, the restaurant, a souvenir shop, and a photo studio to dress up with a typical costume of the Wild West, and take a photo as a souvenir in a picture frame that is like the posters of bandits (Wanted).

In Fort Bravo you have the opportunity to ride a horse through all the streets and places of Fort Bravo like an authentic cowboy, with friends or your family, it is not required to have previous experience and can be requested in our Saloon between the shows: 15 minutes – 8€ / 30 minutes – 15€ 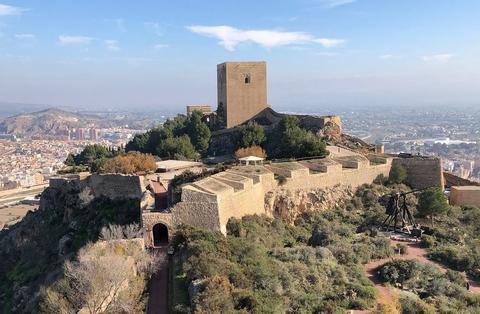 Lorca Castle
Lorca Taller del Tiempo is a proposal of innovative cultural tourism that works for the essence of the most authentic tourism: one that combines learning with entertainment and leisure.

The project, in which the local and regional administration and the business organizations of the municipality participate, was designed to revalue the impressive heritage of Lorca, with a focus on tourism and cultural appreciation from authenticity, quality and sustainability.

Since its launch in 2003, Lorca Taller del Tiempo has been managing cultural and tourist facilities and resources in Lorca, including the Visitor Center, an obligatory starting point within the monumental route of the city, La Fortaleza del Sol in the Castillo de Lorca and the Jewish Synagogue of the 15th century.
The Castle of Lorca is the hallmark of the city, a symbol of power and the incessant struggle between the Nasrid kingdom of Granada and the Crown of Castile.

The castle-fortress is a place where history is experienced first-hand through exhibitions, workshops for the whole family, guided tours and extraordinary activities throughout the year.

In this space, you will be able to see such emblematic scenarios as the walls, the stables, the cisterns, the Torre del Espolón, the Torre Alfonsina or the Jewish Synagogue.

Do you travel with your pet? At Castillo de Lorca, pets are welcome to accompany their owners during the visit to the Fortaleza del Sol.
Castle of Lorca in Lorca, Murcia, Spain, is a fortress of medieval origin constructed between the 9th and 15th centuries. It consists of a series of defensive structures that, during the Middle Ages, made the town and the fortress an impregnable point in the southeast part of the Iberian Peninsula. 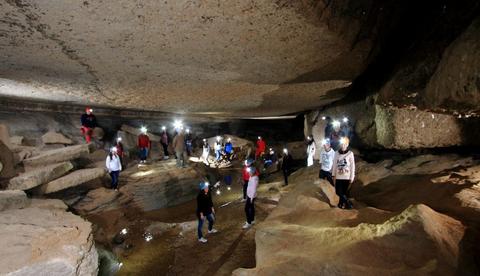 Sorbas Caves
The Caves of Sorbas,  Cuevas de Sorbas, are located in the Gypsum Karst Natural Park of Sorbas, a landscape of surface and underground rock formations, which was declared a Natural Area of Protection 1989.

The caves can be visited on guided excursions and offer a thrilling destination for a day trip in Almeria.
Gypsum Karst Caves  - are very rare, formations are always very young in geological terms, as the mineral Gypsum is quite soluble and rain water will revert the development process very rapidly.

Here in Sorbas, the distinct lack of rainfall has significantly reduced gypsum degradation making Sorbas Caves one of the best preserved Gypsum Karst sites in the world.

An amalgamation of caves and underground channels covering an area of around fifty kilometres, the surface of the terrain displays a multitude of distinctive sinkholes which form a natural entrance to some of the chambers and tunnels.

For centuries mineral water has been slowly dripping from the overhead rocks forming what we know as stalactites, which hang from the cave ceiling, it is from these drips on contact with the cavern floor that the stalagmites rock formations have grown vertically from the ground.

Where the stalactites and stalagmites meet, they have form cohesive columns of rock blocking off cavities holding internal gypsum crystal formations, like treasure caves.

Inside the Cuevas de Sorbas the marvels of the gypsum crystals, stalactites and stalagmites, that are manifested in abundance, are revealed. This is a subterranean world and one of the geological jewels of Andalucia.

Guided tours offer access to the caves, the Gypsum Cave can be visited on both the Simple Tour and the Combined Tour and the Treasure Cave exclusively on the Technical Tour.

GUIDED TOURS
There are three guided tours available to the general public, all of which have to be pre booked and are available in English.
Equipment is supplied and included within the price.
Clothing and footwear should essentially be comfortable and non restrictive, for example a tracksuit or jeans and t-shirt, besides climbing or walking boots, trainers make ideal footwear.
Whichever route you choose this is a one in a million adventure trip that is not only out of this world, but actually inside it! 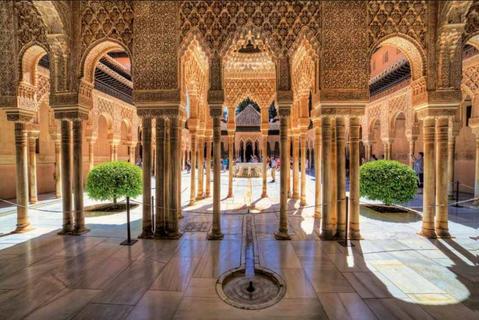 La Alhambra
The Alhambra was a palace, a fortress and a citadel; the residence of the Nasrid Sultans and top government officials, court servants and the royal guard.

The Alhambra was built on top of the Sabikah Hill, which cuts into a fertile valley and stands as the last bastion of the Sierra Nevada mountains, in front of Albaycin and Sacromonte, between the Darro and Genil rivers.
Arab writers compared Granada, which is surrounded by mountains, to a crown, with the diadem of the Alhambra on top.

The Alhambra today was not built in a single time period. It was progressively constructed, with the addition over time of new buildings that were built in groups like cells, enriching the architectural and urban development of the citadel.

It is the result of an evolutionary process over more than two and a half centuries, during the reign of the Nasrids, and includes structures predating that time as well as important contributions and modifications during the Christian era, which continues to this day.