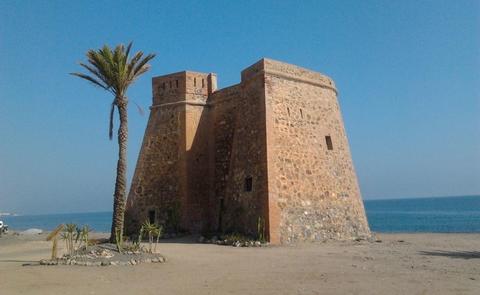 Macenas Tower
Macenas Castle, also known as Macenas Tower, is a military building that was built during the 18th century for the surveillance of the Almeria coastline. It was built on a previous tower and had a capacity for two cannons.

It was restored in the 90s, to a reasonably good standard. The tower of Macenas is a military structure horseshoe tower, which is located on Macenas beach, near the town of El Agua del Medio, located south of Mojacar (province of Almeria, Andalusia, Spain), near the road that leads to Carboneras. It is in good condition. Free access to the outside.

On its southern side there is a dirt track which leads to La Torre del Perulico, or Torre del Peñon, built during the Nasrid period (13th-15th centuries). This tower was part of a defensive system along the Mediterranean coast. The tower itself was built capable for two 24-pounder guns, as reported by Felipe de Paz in 1803: and was accessed by a high door with a rope ladder. Its spaces are vaulted; in the lower floor the powder keg and spares were kept, in the middle the kitchen and salon room, and in the upper or roof the cannons and, towards land, a high parapet for the rifle. In 1830 it is reported that it was dismantled and guarded by a corporal and three turrets. In 1873 it is reported that next to the Tower there was already a barracks house. It was used in the Spanish Civil Guard, when it was equipped with a door on the ground floor that is still conserved. 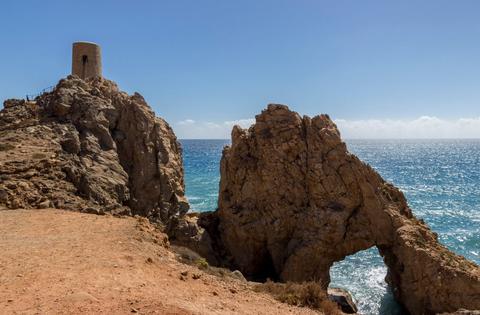 Perulico Tower
From Macenas Castle there is a dirt road that culminates at the Perulico Tower, also known as El Peñon Tower. It was built in 1526 on an old tower and is a cylindrical shaped tower 10 meters high. The tower has the peculiarity of having a tunnel excavated in its centre, which was done in 1526 when they referred to it as the Horadada Tower.

It is currently restored and is in good condition. The rock with the tower and its great natural arch form a site of singular natural beauty. The Torre del Pirulico,/ Atalaya del Peñón / or Torre de los Diablos is a watchtower or coastal watchtower located in the municipality of Mojácar (south of the Torre de Macenas), province of Almería, Andalusia, Spain.

It is a Nazari watchtower, built between the 12th and 14th centuries and which would continue to be used as a watchtower during the 16th century.

This monument was restored in 2009. Climb the steps for breathtaking views from the tower along the Mediterranean coastline. The tower is Moorish in origin and has served historically for strategic coastal defence. A natural arch formed by the erosion of the sea adjacent to the tower makes the area very interesting photographically and you will often find visitors taking snaps from various angles around the tower. 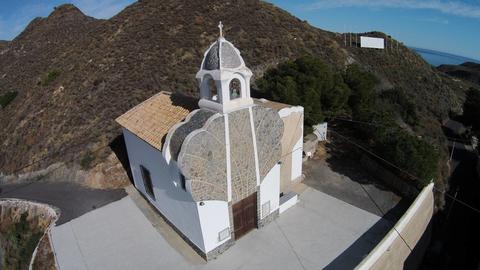 San Pascual Bailon Hermitage
It is located in the area of Agua de Enmedio, in the direction of Sopalmo. It was built in the 20th century thanks to the money sent by Pascual Artero; a Mojacar citizen who emigrated to Guam island where he made his fortune.

At present it is used by the Anglican church. 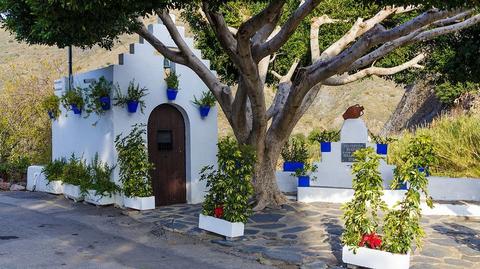 Sopalmo
Sopalmo, which means natural shelter or cave, is one of the Mojacar districts that best preserves the essence of old times. Sopalmo has traditionally been a meeting place for artists and painters, where its light and landscapes have inspired numerous works. 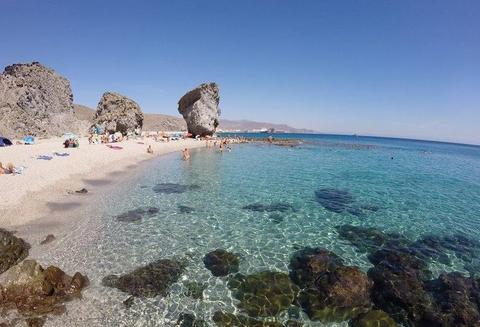 From the lookout that is installed next to the road you can see a wide panoramic view of the beach. Close to it, a path, also accessible to vehicles, leads to the lighthouse of Mesa Roldán.

Playa de los Muertos is vast beach, extending over a kilometre along the Mediterranean Sea. The beach is 1160 metres long and 30 metres wide. It is well protected because of the coastal mountains. The fantastic water clarity here allows swimmers to discover interesting rock formations and the wonderful marine life.
Getting to this beautiful beach can be difficult for young children and those with difficulties walking. There are two small trails leading from the AL-5106 road and the tourism office. The first path is slightly longer (700 metres), but more manageable. The second way is shorter (100 metres), but much steeper.

Along the road towards Carboneras there is ample parking space for cars on both the right and left side of the road. The cars are fully exposed to the sun, but it is a safe place to park and is guarded in midsummer. Nevertheless, you still shouldn't leave valuables in the car  - take them or at least stow them away in the boot. 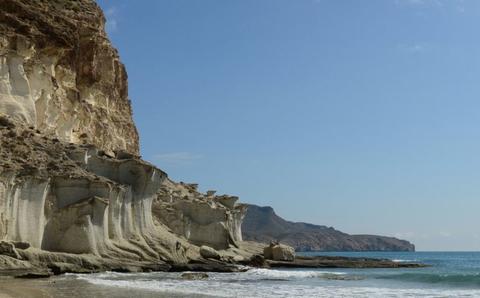 Cabo de Gata
Cabo de Gata-Níjar Natural Park in the south-eastern corner of Spain is Andalusia's largest coastal protected area, a wild and isolated landscape with some of Europe's oldest geological features. Spain's south-east coast, where the park is situated, is the only region in mainland Europe with a true hot desert climate (Köppen climate classification: BWh).

Offshore are numerous tiny rocky islands and extensive coral reefs teeming with marine life.[2] Its climate is the driest in Europe, with rainfall below 160 mm (6.3 in) a year and average yearly temperatures above 19 °C (66 °F). In 1997 it was designated as a UNESCO Biosphere Reserve. In 2001 it was included among the Specially Protected Areas of Mediterranean Importance.

A unique climate, the volcanic origin of its soil and the diversity and uniqueness of the flora and fauna that is the fruit of the contrasts that exist between the marine, coastal and land environments, are the best letter of presentation for the Cabo de Gata Níjar geopark, the largest protected area on the Mediterranean coast.

The mountain range forms coves of great beauty that give rise to fifty kilometres of the best preserved rugged coast on the European Mediterranean. Urban beaches such as the one at San José and Aguamarga; magnificent natural beaches such as Mónsul and Los Genoveses; recondite and almost inaccessible coves such as Carnaje and Enmedio; spectacular volcanic cliffs and reefs such as Punta de los Muertos and Mesa Roldán. Excellent specimens of dune formations, both fossil ones, with white and grey sand -San Felipe de los Escullos and Las Amoladeras-, and ones in movement, which cause coastal spits that enclose lakes and create such attractive landscapes as the Salinas del Cabo de Gata, a humanised place that is exceptional for birds.

The land-sea nature of this natural park conditions the presence of an important range of activities. Underwater diving, in crystal-clear waters -La Isleta or San José-, boat rides to coves of unusual beauty -Cala Chica or San Pedro-, kayaking or bathing shape a tourist product that takes place at the best beaches on the Mediterranean coast.

The network of signposted trails offers routes either on foot, by bike or on horseback You can explore the natural and cultural heritage of this protected area, which has up to one hundred and fifty assets classified as being of ethnological interest (farmhouses, waterwheels, wells, sluices and mills) and a high number of forts and castles, which were once defence against Berber pirates. Likewise, the geopark houses numerous industrial-archaeological complexes of a mining nature, amongst which the gold facilities at Rodalquilar stand out due to their importance, and the pier for loading minerals at Agua Amarga.

Birdwatching, whether steppe birds at Las Amoladeras or water fowl at Las Salinas at Rambla Morales; stargazing on the Los Genoveses beach; night hiking or discovering more about the interesting geology at this geopark all together form an above excellent range of options.